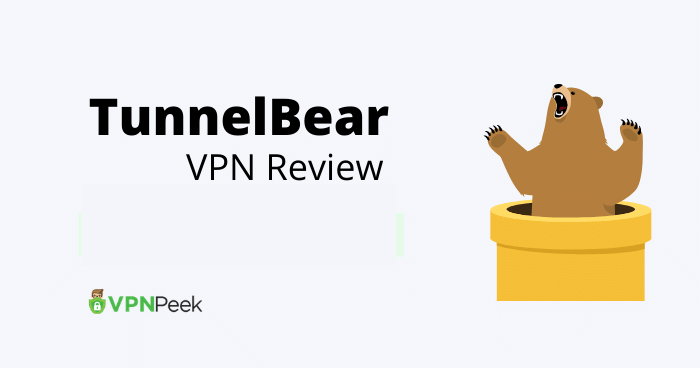 TunnelBear is one of the most useful VPNs on the market. Most people know TunnelBear as a free VPN. Since the free version of TunnelBear VPN works almost as well as the paid version, it is a good VPN for novice VPN users.

TunnelBear is based in Canada and has been a significant player in the VPN market since 2011. Internet security giant McAfee recently took over this VPN. It is a multifunctional provider with software that is compatible with all platforms. It has well-designed apps for Windows, Mac, iOS and Android. But you won’t be able to install it on the router.

TunnelBear offers free and paid VPN services. Both versions use secure AES-256 encryption, allow unlimited torrenting, and hide you from your ISPs.

Unfortunately, there are only 26 VPN server locations to choose from, and the VPN doesn’t work with Netflix or BBC iPlayer. TunnelBear also has compatibility issues because it doesn’t have a Fire TV Stick app, and you can’t install it on your router.

All in all, TunnelBear is neither the best nor the cheapest VPN, but it is a good VPN if you want a secure and straightforward service to hide your IP address or secure your internet connection on public Wi-Fi networks.

In this review, we will figure out the TunnelBear feature, speed, and security. Before going into details, here are the main arguments for and against TunnelBear. Let’s start with the pros and cons.

Pros and Cons of TunnelBear

TunnelBear works by creating a virtual private network connected to the web through your home connection or when using Wi-Fi publicly places. Its means your internet security provider only sees your access to the VPN servers, not which websites you visit. Besides, your IP address is additionally hidden.

GhostBear makes your encrypted data less visible to governments, businesses and ISPs. It does this by making VPN traffic less visible on your network, making it harder to block. This feature is useful in places where internet access is severely restricted, such as China, Iran and the United Arab Emirates. GhostBear is currently available for Windows, macOS and Android apps. GhostBear is not available for iOS due to iOS design limitations.

TunnelBear is aware of its login policy and describes everything it does and does not collect.

As for what it collects, it includes data related to platform operations, such as the version of your device’s operating system, the version of the TunnelBear client, and the bandwidth used for each user. Month. None of this can be associated with the identity of a particular user.

SplitBear is a feature of the TunnelBear. The SplitBear ( Split Tunneling) allows you to control which apps are routed through VPN and remain unencrypted through your regular ISP. The SplitBear feature is only available on Android devices running on (5.0) Lollipop or later.

How safe is TunnelBear?

Perhaps the most important aspect of a VPN is security. You want your data to be safe and you can surf the internet anonymously. It’s great with TunnelBear. They meet the highest international encryption standards and provide only the most secure VPN protocols. TunnelBear uses the AES-256 for data encryption, SHA256 for data authentication and 2048, 3072, or 4096-bit DH group for handshake encryption, which is the industry standard for VPNs today.

Internet protocols determine how data packets are sent over a network. VPN security depends on the protocol you choose. TunnelBear uses OpenVPN / IKEv2 on Windows, OpenVPN on macOS and Android, and IPSec / IKEv2 on iOS. All of these protocols are considered extremely secure in the information security community. Below you will find more information about these VPN protocols.

IKEv2 (Internet Key Exchange version 2) – is the most used VPN protocol in the current world. The IKEv2 will automatically re-connect to your VPN after you disconnect from the web. This is very useful for you if, you want to switch between Wi-Fi and mobile hotspots, which is always the case when using a mobile phone.

OpenVPN is an open-source VPN protocol wont to make secure tunnels for your web traffic. The OpenVPN is usually mentioned because the gold standard when it involves VPN protocols, and rightly so because it offers an honest balance of speed and security. It offers up to 256-bit encryption using the Open SSL library and lots of other security measures which will be configured as desired with protocols like PPTP, L2TP, IKEv2/IPSec, SSTP, and more.

IPSec (Internet Protocol Security) is a set of Internet protocols for the secure transmission of data via an Internet connection. These protocols can verify and encrypt data packets sent.

TunnelBear has a minimal VPN server network that covers only 26 countries. It covers the most popular server locations, including the US, UK, Australia, and Western European countries such as France, Germany, and the Netherlands. You can find a complete list of units on the TunnelBear website.

TunnelBear is not transparent about the exact number of tunnels or IP addresses, so it is not known anywhere how well the traffic will be distributed. There are also no dedicated servers for streaming or torrent, which means that most users will have to browse the locations until they find a server that suits them.

Moreover, TunnelBear is compatible with Windows, Mac, Android and iOS devices, as well as VPN compatible routers. VPN browser extensions for Chrome, Firefox and Opera are also available. Since TunnelBear’s premium account allows for five concurrent connections, you can protect most of your gadgets with a single subscription.

How fast is TunnelBear?

The average speed achieved when connecting to a server in the United States is between 201 Mbps and 220 Mbps. This means that TunnelBear is a quality service that is more than enough to deliver HD content and smooth torrenting.

The free version was almost as fast as the first, with very little lag. However, due to the data limit of 500 MB per month, you cannot help but surf the Internet every now and then; We barely managed to complete the speed tests before we hit the data limit.

TunnelBear offers a small free plan for anyone who wants to try out their services, and we’re only referring to a taster, as the free tier is limited to just 500MB of monthly bandwidth. But, it is enough for testing the TunnelBear VPN. However, you can add an extra 1 GB if you tweet about TunnelBear from your Twitter account.

TunnelBear is a secure VPN. It has strong coding and strict journalism policy. TunnelBear uses AES-256 for data encryption, SHA256 for data verification, and Diffie-Hellman changes handshake encryption (2048, 3072 or 4096 bits).

Is TunnelBear Good for Torrenting?

Does TunnelBear Work in China?

Yes, TunnelBear’s GhostBear feature masks your internet traffic to bypass Chinese firewalls and VPN blockers. It’s integrated into the app and included with all TunnelBear plans.

Does TunnelBear VPN Have a Free Version?

Yes, the TunnelBear offer free VPN. You can get a free plan of TunnelBear without credit card. But, the free plan has a limit of 500MB bandwidth.

I thing TunnelBear good because it has a strong encryption AES 256 and most secure VPN protocol. Moreover, it also has a free plan. TunnelBear not working well with Netflix. But, you can download a torrent file with this VPN. It has 220Mbit/s average speed which makes TunnelBear VPN good enough.

Unfortunately, TunnelBear’s customer service could have been better. Although we helped with all our questions politely and friendly, it was impossible to ask a question without an account. Even with an account, you cannot contact them directly. Submit a question through the standard support form, and you will most likely receive a response within 24 hours. It is impossible to send more than one inquiry per hour.

In conclusion, TunnelBear generally works well on most VPN aspects. The speeds are high, the servers are stable, and they provide adequate security and privacy levels. It’s also good that this VPN is open and honest about what data they need and why they are collecting it. However, some VPNs are more secure and offer more privacy.

TunnelBear is an excellent VPN for the “common man.” Its means that the program is easy to use, security is sufficient, and looks good. Also, TunnelBear provides VPNs. Similar to what Apple did with the PC, TunnelBear tries to do it (to a lesser extent) in the VPN space.