What is a VPN connection? How does it work? Why would you use it? 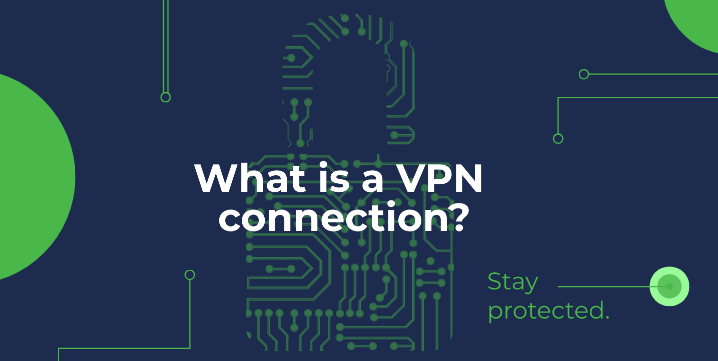 What is a VPN?

VPN (Virtual Private Network) creates a secure connection between you and the Internet. When you connect to the Internet over a VPN, all of your data traffic is sent through an encrypted virtual tunnel. This has several advantages:

More and more people are using VPN while browsing the web. VPN stands for Virtual Private Network. It is a simple and effective solution that offers you three important things when you surf the Internet: more security, online privacy, and freedom. If you are not familiar with the concept of VPN, this can seem quite complicated. This page, we will explain exactly how a VPN works and why people use it. We’ll tell you everything you need to know about the benefits and capabilities of a VPN. We’ll also tell you about some great VPN providers that you can try for yourself.

How Does a VPN Work?

When you find a reliable and secure VPN provider, you can download and install their software. Then you select your preferred security settings and set up a secure connection to the desired VPN server. Connecting to a VPN is easy. When the connection is established, the following will happen to your data:

A VPN connection will encrypt your data traffic, making it harder to intercept and view hackers and other parties. A secure connection also gives the user increased anonymity because Internet traffic is redirected through an external VPN server. As you browse websites through the IP address of the VPN server, your real IP address will remain hidden.

Usually, your location and even your identity can be revealed by your IP address, as it is unique to your internet connection. Using a different IP address (assigned to the VPN server), none of your Internet activity is tracked, allowing you to browse the web more anonymously.

The VPN application runs in the background on your computer, tablet or smartphone. You can access the internet as usual and you won’t notice anything fancy – except that you can bypass internet restrictions.

Why do I Need a VPN?

You might be wondering if you really need to use a VPN. An increasing part of our life is spent on the net. We do banking, keep in touch with friends, check our medical records and surf the Internet. It is important that all this information about you does not just get out on the street. After all, don’t leave bank accounts. If you don’t secure your internet connection, you may find that hackers, governments, your ISP, websites, your employer, and others are learning more about you than you would like. A VPN protects your data from all of these groups.

What is a VPN for? There are many reasons people start using VPNs. The largest can be summarized as follows:

The VPN sends its traffic through an encrypted tunnel. Encrypting your data makes it nearly impossible for anyone to view. This makes it very difficult for hackers, governments and your ISP to access your personal information.

Some people wonder if it’s legal to use a VPN. After all, the service allows you to be much more anonymous online, which can be quite useful for hackers and online criminals. If such people cannot found online, they are still much more difficult to punish for crimes. However, this does not necessarily mean that using a VPN is prohibited by law.

On the contrary: many companies and officials work with VPN and recommend using it. The European Union also supports internet freedom that a VPN can give you.
Many countries find it completely legal to use a VPN. However, illegal activities, while using a VPN are still illegal. So using a VPN for everyday activities like web browsing, gaming, Netflix, and YouTube is not a problem at all. If you are using a VPN, for example, to download illegal files such as unofficial copies of movies and music. However, this is most likely against local laws. While a VPN gives you more anonymity on the Internet and makes it harder for officials to track you, the download itself is still illegal …

There are several countries that make it illegal to use a VPN. Using a VPN in most of the (Western) world won’t get you into any trouble.

VPN networks use an encrypted connection, also called a tunnel. There are several ways (protocols) to configure such a VPN connection. These protocols ensure that your data remains secure and cannot read by others. Most common VPN protocols:

Free vs. Paid VPNs: Which Should You Choose?

While paid VPNs are usually better, it’s hard to know if a free VPN is enough for you. It all comes down to your online hobbies and habits; you probably don’t have to pay to get what you need. On the other hand, most premium VPNs come with a one-month money-back guarantee, which means you don’t have to pay for something you don’t like.

How to Set Up Your VPN?

Setting up a VPN is more straightforward than it sounds. First, you will need to find a VPN service that you like (you can find reviews of different providers and some recommendations on our website).

When you find the best VPNs provider that suits your needs, you can subscribe to their service and download and install the software they provide. Most of the VPNs providers gives software for all types of devices and operating systems. You can choose and download a VPN software for Windows, Mac, iPhone, Android and sometimes Linux. In this VPN providers software, you can select which protocol to use and which VPN server you want to connect to. In just a few clicks, you will be connected to the server.

You can now browse the Internet securely and anonymously, without restrictions or censorship that your geographic location may impose!

Is a VPN safe?

You will wonder how safe you are with VPN provider services. Your internet traffic is redirected and passed through the VPN provider’s servers. The provider can see everything he is doing if he wants to. Hence, you must have confidence in your VPN service. Most VPNs do not record your activities or store your data.

However, there are VPN providers that abuse the data that passes through their servers and, for example, sell your data to advertisers. This is especially true for free VPNs. This is often unsafe. Before using a VPN, it’s essential to investigate the situation beforehand. Later in this article, we’ll give you some guidelines for building good, secure VPN services.

Most popular VPNs on the market?

The most popular VPNs aren’t always among the simplest. A number of them get an audience simply because they’re free. The list below may be a combination of quality and recognition, and that I think this is often the most straightforward thanks to showing which providers are worth some time.

The best VPNs only record the minimum user data necessary for their accounts to function. However, some allow you to create an anonymous profile with a unique email paid for with cryptocurrencies or gift cards. Of course, some VPNs record more than the minimum and are also in countries with data retention laws. Finally, most free VPNs try to register as much data as possible to sell that data to third parties.

Does a VPN hide your activity?

A VPN is probably the best way to hide your internet activity. Encrypts your traffic with military-grade encryption that is nearly impossible to crack. Also, a VPN hides your IP address from the government, your ISP, and other snoopers.

At the same time, there is no tool that can guarantee that your activity will remain hidden. If the government is really interested in you, it can do whatever it takes to locate you, although it won’t be easy. Therefore, if you are not a criminal or a revolutionary, you have nothing to worry about.

Is VPN safe for online banking?

Even without a VPN, online banking is relatively safe. However, you can make it even more secure by adding an extra layer of security. The VPN will encrypt your traffic and hide your IP address before it reaches the bank’s server, which means that it will be difficult for a third party to spy on you. It can be advantageous to connect to an insecure Wi-Fi network at a coffee shop or airport